Skip to content
Homepage / Blogger SEO Tutorial / 10 Strategies To Get More Visitors To Comment
A 2006 study conducted by the Nielsen Norman Group found that, in most online communities, 90 percent of users are lurkers who never leave a comment, 9 percent will comment occasionally, and only 1 percent of your readers will comment on a regular basis. While these statistics remain pretty steady, there are some things you can do to get more comments on your blog. 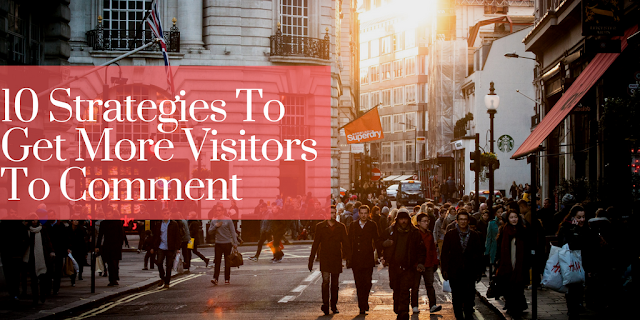 1. Ask For Comments: Most of your readers just don’t think about leaving a comment. It’s not that they don’t want to or don’t have anything to say. They just aren’t in that habit. Give them a nudge and ask them to tell you what they think.
Read Also: How To Optimize Blog Images To Get A Huge Search Engine Traffic [INFOGRAPHIC]
2. Ask A Question: Again, give your readers a reason to leave a comment. Some people are shy and some don’t want to appear to be rude and “interrupt.” Ask them a question to let them know you really do want to know what they have to say.

Must Read: How Do You Make Your Site Appear First In Google Search Results?

3. Leave Them Hanging: You don’t have to complete every thought and your post doesn’t always have to come to some kind of conclusion. Don’t leave out key points, but don’t necessarily tell them everything you know. Leave some room for your readers to join in the conversation.
4. Reply To Comments: The first step is to reply, but don’t stop there. Ask another question and keep the momentum going.
Must Read: Best On Page SEO Techniques For Successful Blogging 2018
5. Post Commenting Rules: Some bloggers have noted an increase in comment activity after they’ve posted some commenting rules or guidelines. Knowing that flamers and trolls aren’t going to be allowed to participate makes your readers feel safe enough to open up with their thoughts and opinions.
6. Show Your Weaknesses: Let your readers see that you’re human, too. Admit that you don’t know everything there is to know and ask them if they can help out the community by sharing their experiences.
7. Be Gracious: Critiques and negative comments are going to happen. Don’t take them personally and accept them gracefully. Never respond in anger on your blog. In fact, the more gracious you are, the more the rest of your readers will disregard those negative comments.

Must Read: The Best Keyword Research Tools for 2018

8. Be Controversial: A controversial post always generates more comments but be careful and be prepared. Always make sure you can back up your controversial viewpoint, don’t just start bashing blindly. And be prepared for controversial come-backs from your commentors.
9. Spotlight Commentors: Use that good comment as springboards for another post and give a shout-out to the person who left it. Everyone loves seeing their name in print and more people will start leaving more valuable comments so they can be the next commentor your highlight.

Must Read: How to Grow Traffic When You Know Nothing About SEO

10. Remove Comment Obstacles: Make it as easy as possible for your readers to leave comments. If they have to register and then log-in to Facebook or Twitter so they can log into your blog to leave a comment, and then include their email address, their link and verify they’re human and… it’s just not worth the hassle. Limit the steps they have to take and you’ll get more comments on your blog.

A Beginner’s Guide to Anchor Texts

How To Refresh Old Content For Better SEO Result